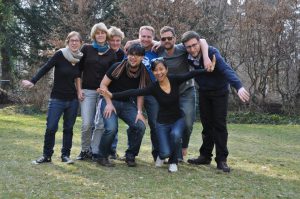 Vicky is an Indonesian researcher based in Berlin and the first chairperson of Mauerpark Institute. Together with other founding members of MpI, she envisions a platform that encourages as well as facilitates collaboration work between youth, young researchers and activists around the world to create positive change. She has an interdisciplinary academic background (psychology, human rights and anthropology) as well as practical experience in research and in various non-governmental organizations in Indonesia and Timor-Leste. Her research interest covers the issues of social suffering, memory work, and the ways communities rebuild their lives after violent conflict and displacement. She is currently teaching and writing her PhD in Anthropology at the Freie Universität Berlin.

Having ditched what would possibly have been a more lucrative but probably more boring life in engineering, Henri has been working, researching and publishing on issues of gender, peace and security. After numerous random twists and turns, he received his doctorate in Conflict Resolution and Peace Studies from the University of KwaZulu-Natal, South Africa, with a thesis on masculinities and violence in Timor-Leste gangs, militias and martial arts groups in 2011. He has and continues to work with a number of NGOs both in Europe and further abroad, and promises to one day plant a forest the size of Iceland to make up for his carbon footprint. His research interests include gender issues, political and societal transformations and peace building.

Anne is a postdoctoral researcher at the Center for Conflict Studies, Philipps-Universität in Marburg. She previously worked at Max-Planck-Institute for Social Anthropology in Halle, at the Institute for the History of Medicine (Justus-Liebig-Universität) in Gießen and as a freelance consultant for International Alert. Her research interests include power and domination in aid, peacebuilding, transitional justice and development; violence, femininities and masculinities; and the future of work, employment and social insurance in the Global North and South.

Nicola  is currently working as an independent consultant on Gender, Peace and Security training, monitoring and evaluation. In the past 10 years she worked for International Organizations, civil society organizations, and academia. She has worked on and coordinated projects and programmes in countries in Latin America and the Caribbean, as well as in Bosnia Hercegovina, Liberia, Haiti, Palestine and Zimbabwe and published articles and training materials on gender responsive peacebuilding, gender sensitive security sector reform, as well as the implementation of UNSCR 1325. Ms. Popovic holds a Master of Law in International Peace Support Operations from the Irish Centre for Human Rights, as well as, postgraduate diploma in Human Development and a diploma in Peace Education.

Nano comes from an Indonesian-French family and studied Political Science, History and International Technical and Economic Cooperation at the RWTH Aachen University. He completed his studies in 2005 with a thesis on the question of national identity formation in Indonesia. Since then Boryano has called Berlin his home, and worked there from 2008 to 2011 for Watch Indonesia!, an organisation promoting democracy, human rights and environmental protection in Indonesia and East Timor. In 2011 he finally obtained his PhD from the RWTH Aachen University in Political Studies on “The Japanese Occupation in the National Culture of Remembrance in Indonesia.” His main interests are in the areas of democratisation processes, political culture, collective memory and the construction of national identities.

Thomas is a lecturer and researcher at the Cluster ‘Languages of Emotion’ and the Institute of Social and Cultural Anthropology at FU Berlin. His research focuses on issues of social inequality, stigma, marginality and the interplay between culture, emotion, health and illness. He spent almost four years of applied anthropological fieldwork in Indonesia (mainly Yogyakarta) over the course of the last ten years. He is the co-founder of the Yogyakarta-based shelter for HIV-positive people, who live on the streets, Rumah Sehat Lestari, and the recently halted independent cinema-café KINOKI Yogyakarta.

Nils studied political sciences at Freie Universität Berlin and is nowadays working for the Erasmus Mundus office at Technische Universität Berlin, where he contributes especially to the exchange of students and scientists from the arab world. Prior to that, he was working in the German Bundestag (Parliament) in the office of the former minister for economic cooperation and development, Heidemarie Wieczorek-Zeul. His fields of interest are the build-up and support of democratic structures as well as the socio-political aspects of labour relations.

Academically, Samia is situated between political sciences and anthropology. She is writing her PhD on the transnational migration of Indonesian domestic workers in Hong Kong, for which she has done extensive fieldwork. Her interest in relations of care, feminist economics goes beyond academia.